Designed to improve on the already impressive Osmo Mobile 3, the DJI OM 4 smartphone gimbal packs in a stronger motor and more torque than its predecessor, with an even more compact frame that's easier to balance and fold down. Thanks to its magnetic smartphone mount, attaching your smartphone is easier than ever as well.

The gimbal is controllable with the DJI Mimo app (available for iOS or Android devices), supports Bluetooth 5.0, and features a number of different modes to help simplify whatever you're trying to capture, such as Sport and Inception modes. Advanced features such as hand gesture control and body shape recognition help round out its ease of use.

You can mount any smartphone up to 3.3" wide in its phone cradle, and its magnetic phone holder and smartphone magnetic ring allow for simple and fast mounting and unmounting. The integrated intelligent sensor even tells you when your smartphone is mounted.

The redesigned handle is more comfortable to grip at a 15° angle, and gives you a number of other improvements, such as accessibility to all ports while charging and the ability to mount more accessories to the gimbal itself.

The OM 4 syncs up with the DJI Mimo mobile app to provide you with multiple shooting modes and functions including Portrait, Underslung, Landscape, Time-Lapse, DynamicZoom (Dolly Zoom), Hyperlapse, enhanced Panorama, Slow-Motion, Inception-style spin, and Sport mode for fast-action shooting. In addition to using the joystick controls on the handle, you can also use hand gestures to control the gimbal to track your movement, take a selfie, or start/stop your smartphone camera, so you don't have to press the record button or touch any controls. It can also automatically track body shapes to track human subjects without the need to make a manual selection with ActiveTrack 3.0.

The built-in battery runtime is approximately 15 hours, and it takes approximately 2.5 hours to charge using the included USB Type-C cable. There is a USB Type-A power output on the back of the handle to charge your phone or other accessories while operating the gimbal. The bottom of the gimbal handle features a 1/4"-20 mounting thread to mount the gimbal on the included grip tripod or other accessory. A storage pouch and wrist strap are also included with the gimbal. 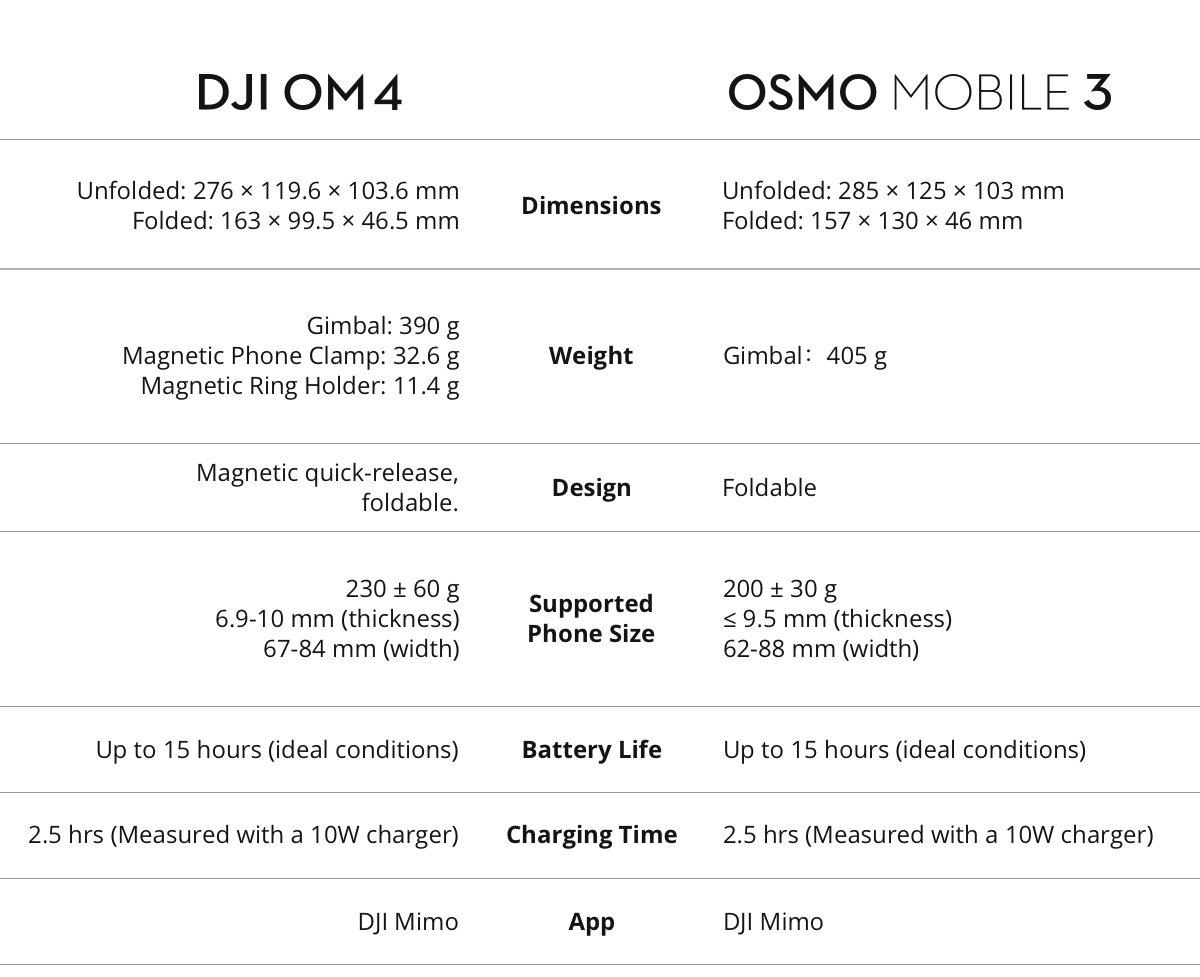 When the DJI Osmo Mobile 3 smartphone stabilizer was introduced, it impressed users with its foldable and portable design. This makes it easy to carry around and serve as a DJI phone gimbal you could use to capture everyday moments of your life.

DJI OM 4 comes with an upgraded magnetic quick-release design that simplifies your entire shooting experience. When considering a phone gimbal for daily shooting, DJI engineers were focused on improving how quickly you can use the gimbal to produce a video. The new DJI gimbal is also a more comfortable video stabilizer for people who shoot for extended durations. 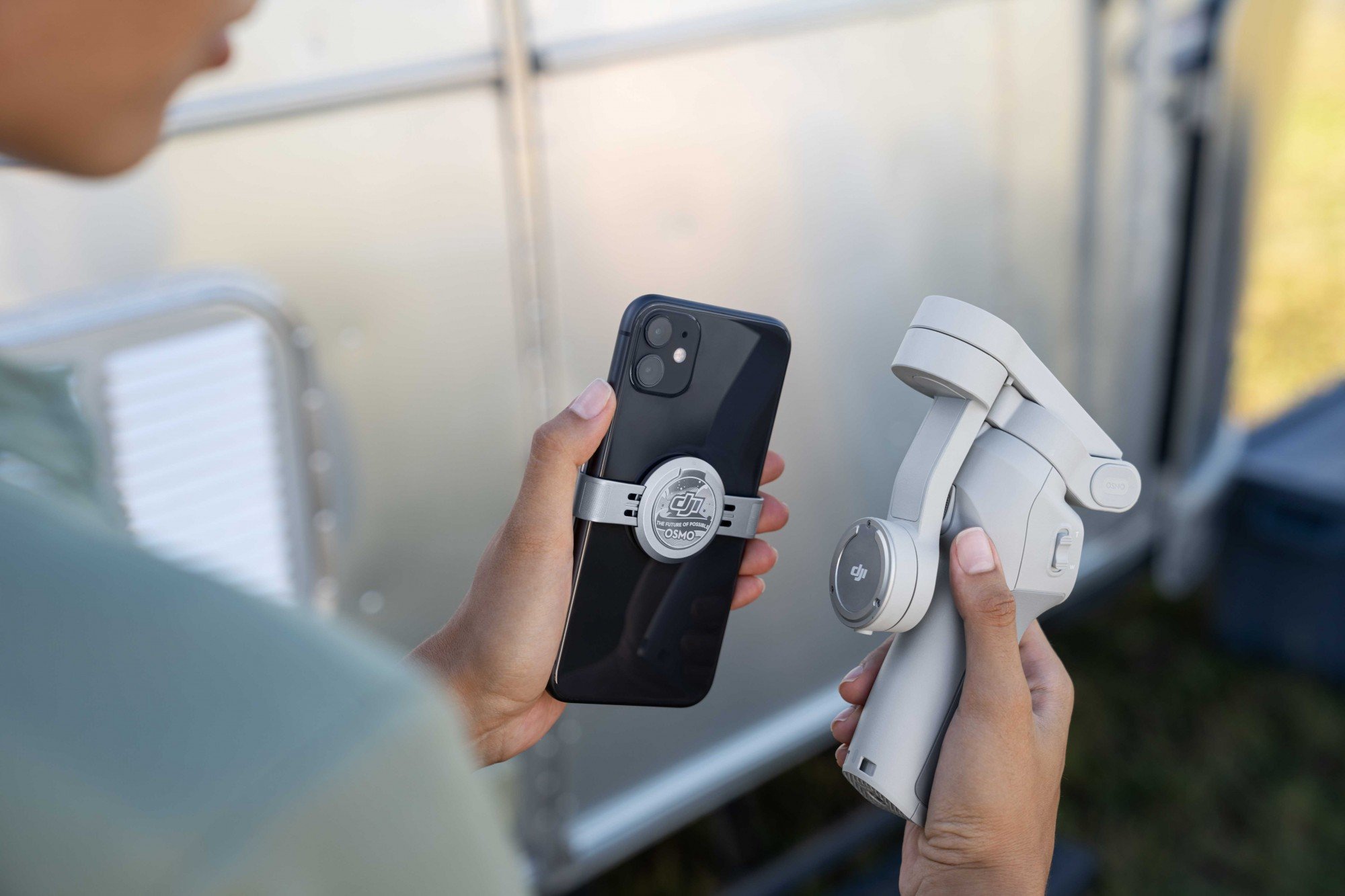 Traditionally speaking, gimbals often require leveling, and a certain amount of time is spent setting the device up. When it comes to shooting daily, every second counts. This was the consideration DJI had in mind when adding a magnetic quick-release design to the new DJI OM4. But how does this new magnetic setup work, what does it look like? Let’s take a quick look.

DJI OM 4: How Does the Magnetic Design Work?

At the heart of the new DJI OM 4 is an ultralight magnetic phone clamp that connects to your phone and keeps it securely in place. The other addition is the new Magnetic Ring Holder, which attaches to the back of your phone and connects directly to the phone gimbal using — yes, you guessed it — a magnetic attraction. With this new design, almost no leveling is required, which means you can take off whenever you need to!

The Magnetic Ring Holder also doubles up as a holder for stand for your phone. It’s that simple. With this intelligent new design, you can capture smooth gimbal video whenever inspiration strikes. Speaking of a better shooting experience, let’s move on to the second DJI gimbal comparison: stabilization. After all, this is one of the most important things you need to know before buying a phone gimbal.

The new DJI OM 4 gimbal also features the same 3-axis gimbal like the DJI Osmo Mobile 3, delivering super-smooth gimbal video. The 3-axis refers to the way the gimbal can stabilize movements across three axes: forward-backward, left-right, and side-to-side. This simply means any movements you make in those axes will be stabilized by the gimbal, which produces shake-free gimbal video. 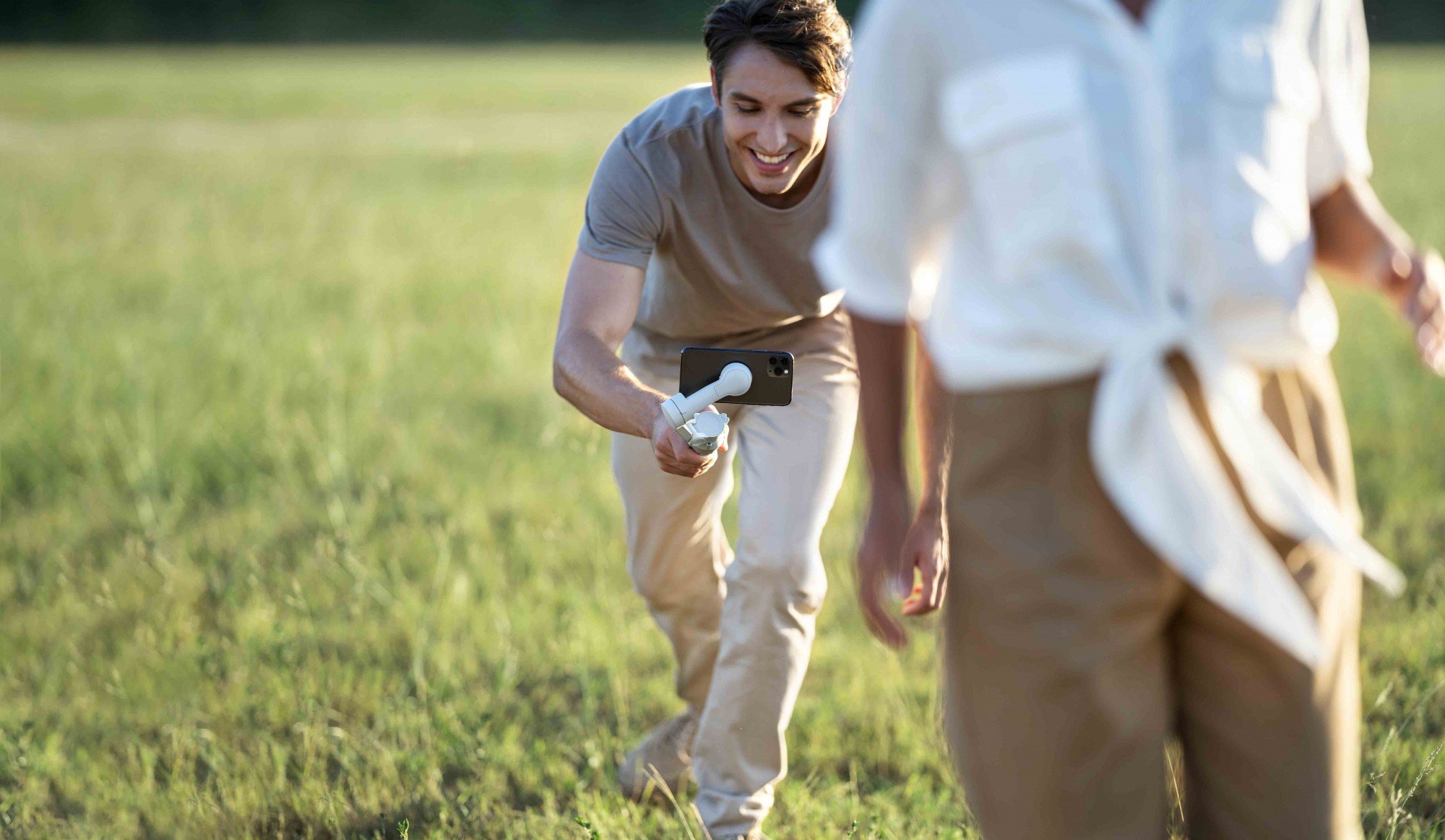 So, whether you are running in the park or filming a new dance routine, your gimbal video will always be as smooth as ever. The DJI OM 4 simply does all of the hard work, so you don’t have to worry about the device moving while you are shooting. That’s a big plus for users who want to shoot on the move.

When it comes to intelligent features, DJI OM 4 and DJI Osmo Mobile 3 feature a full house of creative modes for quick and easy shooting.

ActiveTrack 3.0 lets you follow your subject, offering smart recognition and high-precision tracking. Whether you’re walking in a park or taking things up a notch, you never have to worry about missing out on the action. 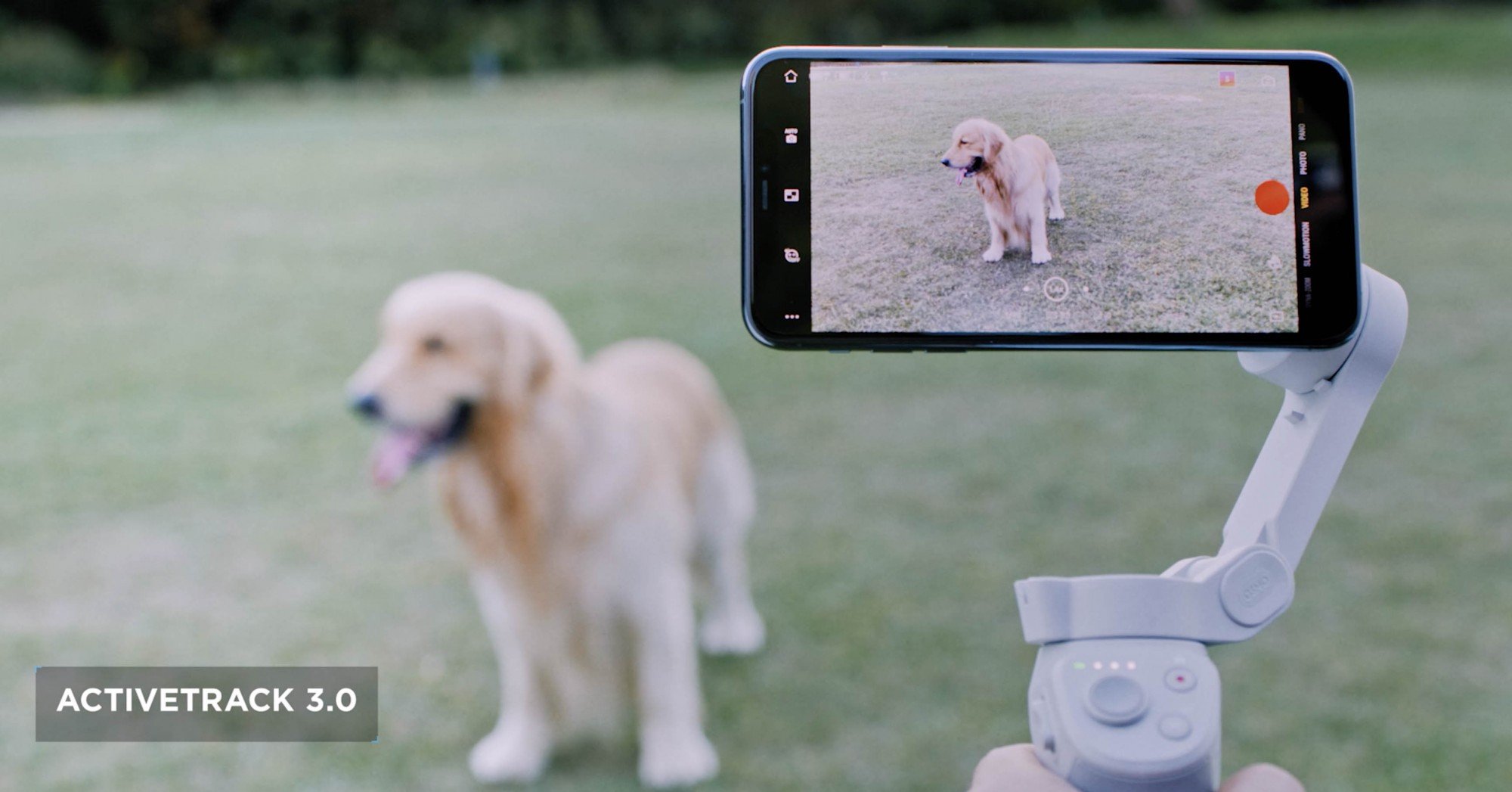 Chances are you’ve come across the Hitchcock effect in your favorite movies and films. It’s the creative effect that produces the special Hollywood warping effect. DJI OM 4 now supports DynamicZoom, which produces this impressive shot without you having to do any complicated editing. Now you can turn ordinary phone video into awe-inspiring shots with a simple tap. Next up, we have another DJI Osmo feature that is debuted with the new DJI OM 4. As you’ve probably guessed, CloneMe Pano is an intelligent mode that places you in several locations of your shot. This clever little feature creates an epic panorama shot that pauses in between each shot to let you strike a different pose. The result? An amazingly creative shot you can share with everyone! The best part about this new feature is that the DJI OM 4 does all the work – well, almost – you still need to strike a pose! The best phone gimbals on the market have tons of creative features and intuitive modes that bring out the best from your phone camera. Whether you’re taking a selfie or one of those group photos that always seem to take forever, Gesture Control lets you take a picture or video with just a simple gesture! No more waiting, no more taking turns to see who can hold the camera steady, just strike a smile and let DJI OM 4 produce the best shots you ever taken on your phone! DJI OM 4 makes every second count with Timelapse, Motionlapse, and Hyperlapse. But what’s the difference? Timelapse produces a high-speed video from a long-duration of static filming, perfect for capturing a sunset. Motionlapse steps up the pace and allows you to add camera movement to the shot, which is great for capturing a busy city from above. Last up is Hypelapse, which takes a timelapse while you are moving with the gimbal and camera. Think hiking trails, expeditions, montages for your vlogs, and you will discover just how creative these modes are. For the last feature, DJI OM 4 also has a 3×3 Pano mode that combines nine images into a super-wide-angle shot. No post-processing required. Just select the mode, shoot, and carry on your day.

The DJI OM 4 gimbal also produces a stunning 240° panorama image that captures a wide-view of your subject. Whether you’re capturing mountains, the sea, or anything around you, give 240° Pano a go!

But wait, there’s more. SpinShot is a super cool feature that rotates your phone while you capture a video, producing a unique and fun shot. You can use this when you’re walking, playing sports, or pretty much anything else you can think of!

Sometimes you’ve got to slow down life to appreciate the finer details. DJI OM 4 features a Slow Motion mode that quite literally lets you capture details as you’ve never seen before. From the fluttering wings of a bird to a chef preparing your favorite dish, you capture amazingly smooth details straight from your smartphone.

When it comes to how easy the gimbals are to use, DJI OM 4 offers an upgraded experience thanks to the quick-release magnetic design. The magnetic gimbal design lets you setup and shoot in seconds. Single-handed operation makes all the difference between a DJI gimbal you use and a gimbal that stays at home. Both DJI gimbals are incredibly easy to use. Tap the M button to rotate your phone instantly for vertical videos. For all you Instagram and social media fans, this makes creating unique social media content a walk in the park. Most of the DJI Osmo gimbal features and camera modes can be accessed with single-handed operation.

In Stock
Ducame Limited Adapter of Osmo Pocket to Gopro
0