The Lenspen SensorKlear II with Articulated Tip is made to be used with the Sensorklear Loup. It is designed to reach those hard-to-get-at spots on your CCD sensor and remove bits of dirt and dust that can contaminate your camera.

Designed with no sprays, no liquids, no chemicals and will not leave a residue

Minimizes any kind of static build-up

Clean CCD and CMOS sensors like the pros! SensorKlear II combines the unique LensPen cleaning tip with an articulating head - use it in combination with the LensPen SensorKlear Loupe for fast, effective sensor cleaning results every time!

Protect your investment, get only the ORIGINAL LENSPEN!

Is Lenspen environmentally friendly?
Yes! LensPen requires no solvents and, unlike lens tissues, creates no waste.

Why does LensPen leave a black mark on my finger, but not on the lens?
LensPen's cleaning compound is carbon based, similar to a pencil lead. It leaves black marks on all surfaces which are not very, very smooth.

Can I trust Lenspen?
Extensive testing of LensPen on expensive lenses and lens coatings has proven that the cleaning compound is safe to all lenses and coatings. The test results are available to you. They're about 17 pages in total. Further, LensPen has been purchased by Minolta, Polaroid, Fuji, Carl Zeiss, and many other customers concerned with quality. These customers wouldn't have considered purchasing LensPen without testing and verifying on their own.

Will Lenspen clean eyeglasses?
Technically, the process works fine. The problems revolve around ergonomics and the fact that eyeglass lenses get very dirty and have both convex and concave surfaces. Its unwieldy to use in its current form.

How long will LensPen last?
This depends on how dirty the lens is and what type of contaminant is present. LensPen was tested by removing 500 fingerprints in a row from a lens with no discernible loss of cleaning quality.

Why do LensPen and MiniPro leave a residue on my lenses after I clean them?
Excess cleaning compound might be left on the lens after cleaning. If this occurs, pat the tip on a clean chamois or a clean soft cloth to remove the excess compound from the cleaning tip. Pressurized air or a "blower brush" will also work to blow off any excess compound on the lens.

What is the difference between Lenspen and MiniPro?
MiniPro is specially designed for smaller optical lenses. As you can see by the actual cleaning sizes, MiniPro's tip can reach very small areas around the lens surface.

How to use?
Visit http://www.lenspen.com/403 on instruction of using LensPen. 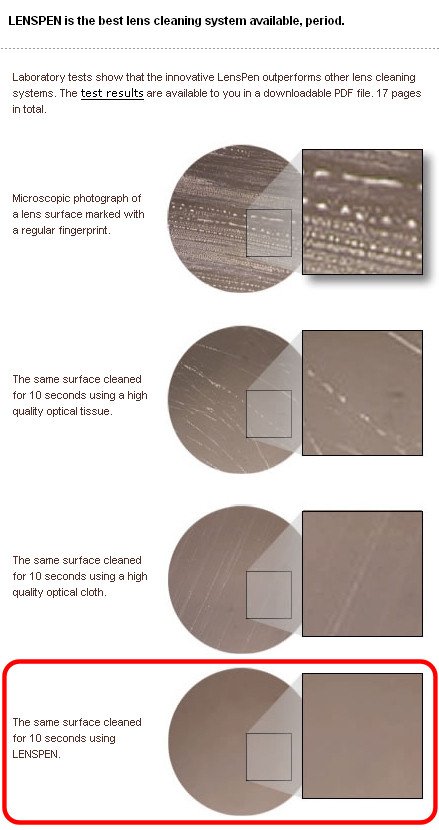