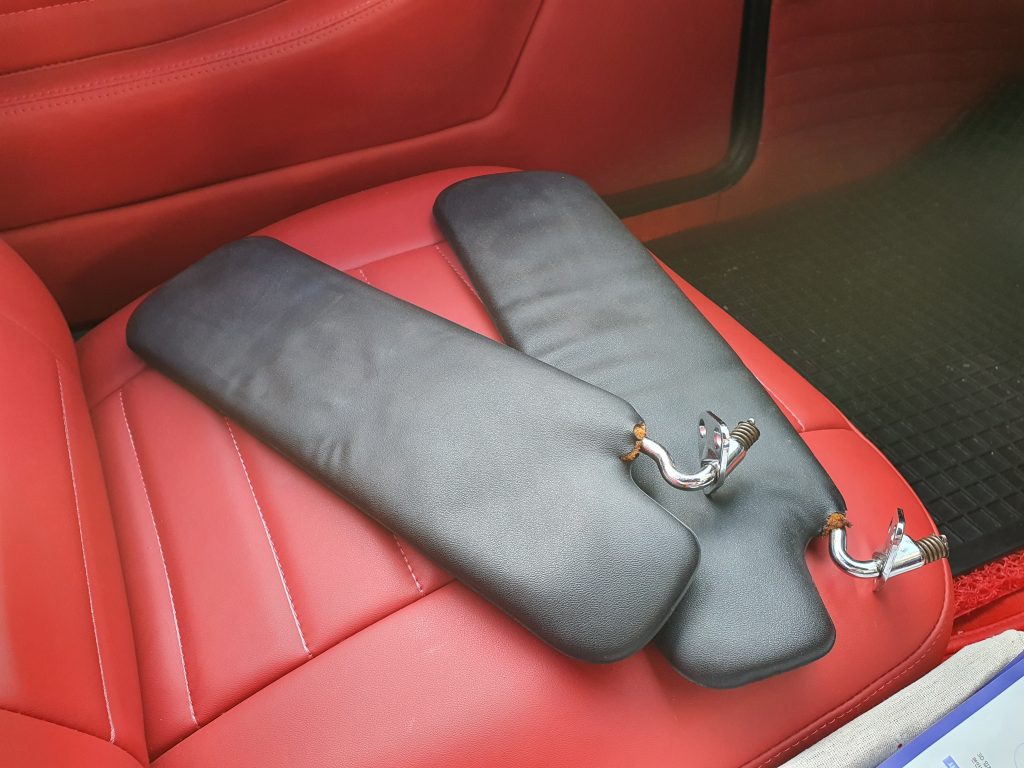 Early morning sun, when I drive to work, when the sun has just risen from the horizon, I have to either use my hand to shade it from direct shines into my eyes, or I have to sit real straight, having my head almost touching the roof, to avoid looking into the sun.

Either way, it is inconvenient.

The previous owner has removed the sun visor from the Volvo P1800. It does looks clean and neat, but when coming to practicality, it is a NO NO. Of course, the time to really use the sun visor is minimal, but when needed, you just wished it was there.

I have been searching for a pair of USED sun visor for my Volvo P1800 for quite sometime, but not avail. So, I ordered two brand new sun visor brackets from USA, without the sun visors (a pair of brackets at USD50). Why without the sun visor? Because new one is just way too expensive at over RM700 per side! I thought of DIY one myself later, after gotten the bracket.

Then, one day I received an email alert from ebay on a set of used sun visor for P1800 listing. A set of 3 pieces actually. Quite a bargain, so I bid and won. No other bidder fighting with me, so I got it at the opening price of US $24.99. However, shipping costs another US$22, so I end up paying nearly US$50 for them. Still, save my effort of DIYing the sun visor later, which might end up as a white elephant.

Got the sun visors few days ago, I selected two that are of better condition (one has the chrome bracket rusted), clean them up using alcohol spray, then shine them with my trusted WD40 lubricant. They looks fabulous! Of course not like new, but original and good match to my black roof.

Installation was easy, if you know how. I have no experience, so I have to guess where the holes are. I removed the vinyl of the side fender, exposing the holes. With that in sight, everything comes in place and easily done. I used the 6 screws that I bought together with the brackets that arrived earlier, as the USED set from ebay doesn’t include screws. Finding the right screws will be another challenge.

They are not perfect, and I somehow find the little ear that extended out seems not correct. Just checked online, I think my 1965 model should not have that extended ear, but nevermind, it serves the purpose for now on, and it is nice that I have installed them to my car utilizing their mission.

Another small step in perfecting my classic.