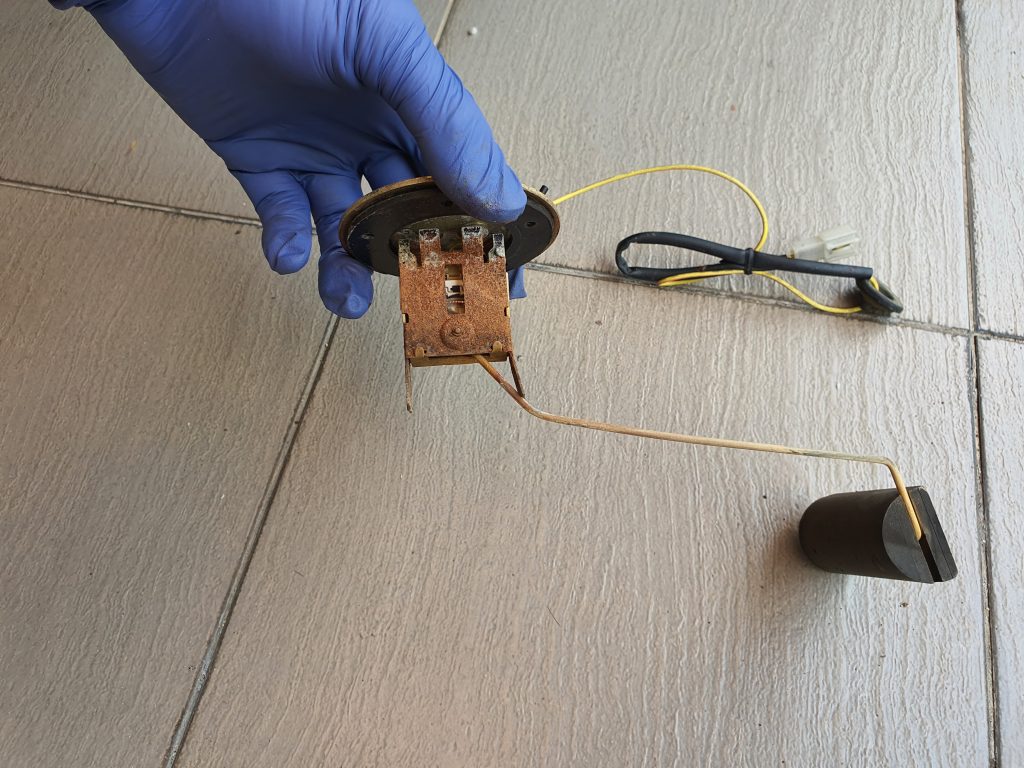 Bought an USED fuel gauge from ebay for my Volvo P1800, it is working, which I am really glad. My fuel sender is working as well, which is a great news!

No problem as long as it gives indication correctly on the fuel level in the tank. I knew F means empty.

I did google on how to correct this, but find no solutions other than buying a correct sender unit. I suspect the fuel gauge is from USA, while the sender is from Japan (Toyota), so the reverse indication. The cable connecting to the gauge or the sender unit is just a positive cable, so there is no such thing as reversing the + – ve to get the correct reading. I don’t want to buy a new sender as it requires drilling of my fuel tank, which is a big project (have to empty the tank, take it out from the car, clean it thoroughly before drilling (to avoid sparks and explosion). Too big project.

To remove the sender unit is quit easy and straight forward. Just unplug the power cable and unscrew 6 screws, then the sender unit can be taken out. When the tank is full, the float will go UP to the LEFT side. So I just need it to go to the reverse (RIGHT) side when full.

There is no switch or easy way to reverse the direction of the float. So, I decided to just bend the metal rod to the opposite direction. With two plyers, this was done quite easily. I turned on the car key, and found the fuel gauge showed only HALF full. Hmm…this doesn’t look good. (the gauge is quite rusty, but working fine)

I remembered seeing photo of the fuel tank cross section, where there are dividers inside the tank. Below are what I found online. When reversing the direction of the sender, the divider was blocking and preventing the float from going up. That’s why only HALF tank.

I decided to take the sender out and bend to different direction to avoid the divider.

After trying out several angles and directions, this is the final output. The needle does not hit the F word, but it is close to the line, which I am happy with.

The fun of owning an old car from the 60s.